Al Naboodah is a trusted brand renowned for the delivery of world-class projects and services and exceeding the quality demanded by its clients. We wholeheartedly engage in sustainability at every level in our organisation, starting from the very top, and we acknowledge the vital role it has to play in any organisation looking to a successful future.

The vision is our guiding principle – the ultimate statement of what we want to be as a company and where we are going. The mission is a statement about how we are going to achieve this vision in our day-to-day business activities. 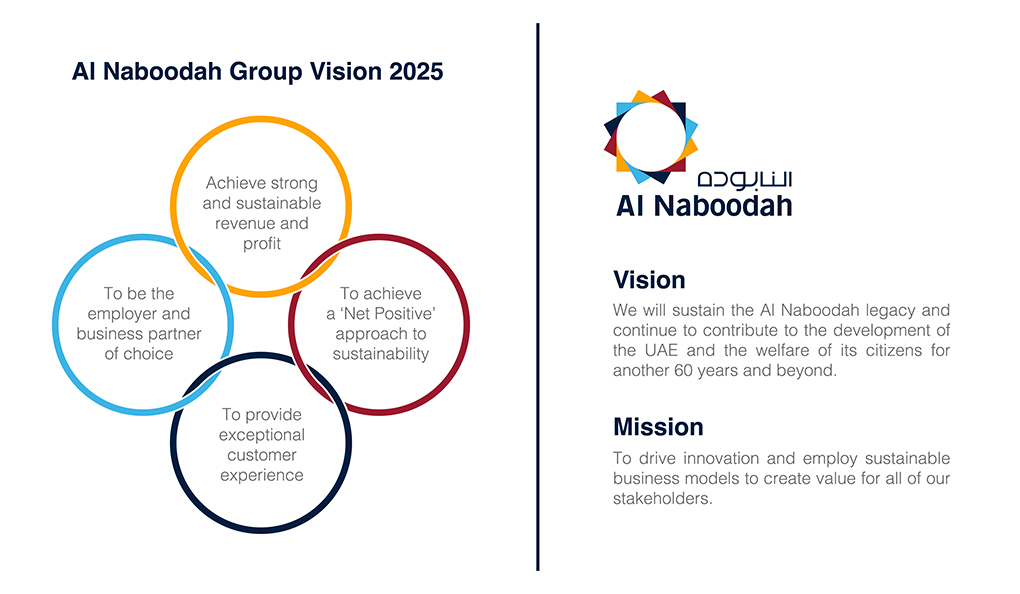 By 2010, the Group had diversified into multiple sectors, offering an impressive portfolio of global brands to become one of the leading conglomerates in the UAE.

With the objectives of consolidating the Group’s activities and streamlining its management processes, Al Naboodah Group Enterprises (ANGE) was established in 2014 to undertake the management of the company’s operating business. Also in 2014, the group expanded its automotive services with the establishment of Smart Auto Care for automotive repairs and body shop, and Al Thiqa Rent-a-Car.

In 2015, Al Naboodah completed construction of its award-winning headquarters in Al Awir, Dubai. All corporate functions moved to the new offices, while the holding company, Saeed & Mohammed Al Naboodah Holding, continues to operate from the Al Shoala offices in Deira.

One of the new company’s first steps was to formalise its approach to corporate governance and create a sustainability framework, supported by a sustainability committee comprising members of senior management. In 2016, the Group issued its first Sustainability Report, created according to GRI standards, with full transparency on the company’s sustainability efforts.

2017 was witness to a number of significant milestones, marked by geographic expansions into new strategic markets and new additions to the Group’s brand portfolio such as Lumez, a self-owned LED lighting line, Dutch truck manufacturer DAF, and the debut of British motorcycle brands Triumph and Royal Enfield into Vietnam.

Achieving its stated 2020 Vision of being an employer of choice in the UAE and beyond, the Al Naboodah Group becomes the first company to be awarded the UAE’s Happiest Working Environment by the UAE Ministry of Human Resources and Emiratisation in 2017.

A momentous year for the UAE, 2018, the Year of Zayed, also proved to be one of the most significant years for the Al Naboodah Group as well, as it celebrated ‘60 Years of Excellence’ since it was founded in 1958.

Further building on its strong sustainability vision, in January 2018 the Group’s second annual Sustainability Report was issued, this time fully GRI-compliant, and outlining the significant progress the Group made in its sustainable development over the course of 2017.

In line with Al Naboodah’s vision of creating a sustainable future for the UAE, in 2018 the Group also launched its Solar business under the Al Naboodah Electrics division, becoming a DEWA-approved contractor to install solar PVC projects as part of the Shams Dubai programme.

In another remarkable achievement, the Group was awarded the UAE’s Happiest Working Environment for the second year running in 2018, decisively confirming its status as the employer of choice in the UAE.

In line with the UAE Vision 2021 and the National Innovation Strategy, the Group launched its Smart Cities business at WETEX 2019. The new business was initially launched across two areas, Smart Buildings and Smart Mobility, to help property developers, homeowners and transport authorities increase efficiencies and develop sustainable infrastructure through building automation and EV technologies.

In 2019 we also added a new brand to our public transportation portfolio, the UK manufacturer of low-floor city buses, Optare. In partnership with the Roads & Transport Authority, Al Naboodah developed the RTA Optare Solo according to the RTA’s specific requirements, and introduced 94 units to Dubai’s public transportation fleet after months of rigorous testing.

The ‘noughties’ would prove to be the Group’s busiest decade to date. As the world moved into the new millennium, the Group entered a new phase in development with the 2001 completion of its head office, the Al Shoala Building in Deira, Dubai.

In 2003, the tremendous contributions to the development of the UAE made by the construction side of the Group was recognised when Al Naboodah Engineering received the Dubai Quality Award presented by HE Sheikh Mohammed Bin Rashid Al Maktoum. At that time no other 100% Emirati-owned construction company in Dubai had received such a prestigious award.

In 2006, the Group underwent a major rebranding process, symbolised by the launch of the now well-recognised sun wheel logo, which coincided with the merger of the Group’s various business units.

This year the Group signed a major partnership with the Roads and Transport Authority of Dubai to supply VDL City Buses for public transportation. Today, one third of the RTA’s entire public transportation fleet is maintained by the Al Naboodah Group, under Swaidan Trading’s commercial vehicles division.

In 2008, the Group reached its 50-year milestone, celebrating half a century of successful operations. That same year, Al Naboodah Contracting began work on the Al Maktoum International Airport, while the Group's Abu Dhabi construction business, which had already been operating there for some years, was formally established as Al Naboodah National Contracting Group. It has since carried out major projects on prestigious developments such as Al Maryah Island and Yas Island, among others.

The 1990s was a decade of booming growth for Dubai, as it rapidly began to establish itself as one of the region’s leading business and trade hubs. During this time, the Al Naboodah Group used the opportunity to strengthen its construction division, and forged ahead into new markets to further diversify its business portfolio.

By the 1990s, Al Naboodah’s booming construction business was creating an increasing demand for a steady, reliable source of high-quality concrete to supply its many building and civil projects across the Emirates. In 1994, Al Naboodah Ready Mix Concrete (ARCON) was established to bring supply in-house and reliably meet the Group's ready-mix concrete and asphalt requirements.

Ever ready to harness the newest technologies, Al Naboodah entered into a joint venture with global electrical fittings manufacturer Thorn Lighting, which led to the launch of Thorn Gulf, a supplier of efficient and sustainable lighting solutions to the GCC region.

By the 1980s the Group's profile had been firmly established in Dubai and it was becoming better known across the Emirates and internationally.

With the opening of Jebel Ali Port in 1979 and the ongoing expansion of Dubai International Airport, Dubai was rapidly becoming a major global hub for freight and shipping. Recognising the potential in the industry, and also to serve its own increasing needs for cargo and freight forwarding, the Group established Al Naboodah Cargo Centre in 1984.

Specialising in international freight forwarding and third-party logistics, today the company is known as Al Naboodah Logistics, and is one of the leading operators in its sector, with a reputation that has earned it the coveted role of official freight forwarder and handling agent for Dubai World Trade Centre Exhibitions.

Swaidan Trading established a partnership with the Hinduja Group in 1984 to exclusively supply Ashok Leyland buses in the United Arab Emirates. Today, Ashok Leyland buses transport hundreds of thousands of workers across the country every single day, and in 2020 Ashok Leyland became the 3rd largest bus manufacturer in the world.

THE BIRTH OF A NATION

2nd December 1971
This historic date marks the unification of the seven Emirates into one nation, and the United Arab Emirates was formed. The new nation joined the Arab League only days later, on the 6th December 1971. In 1972, the Federal National Council of the UAE was formed as a federal authority representing the people of the Emirates. That year, HE Saeed Juma Al Naboodah became one of the first 40 members elected to the council.

The 1970s would prove to be a busy decade for the Group as well, as it began to build strong relationships internationally and enter new markets, as well as taking up residence in a newly constructed head office. The Al Qiyadah building in Deira, constructed by the Saeed & Mohammed Al Naboodah Group and completed in 1973, was a mixed-use project incorporating apartments, retail space and offices that served as the Group’s first official headquarters.

Recognising Dubai’s increasing role as a hub for business travel and tourism, the Group entered the travel market in 1973 with the formation of Al Naboodah Travel. In its early days, the company was the General Sales Agent in Dubai for iconic flag carriers Air France and Cathay Pacific, and today Al Naboodah Travel represents a large portfolio of some of the world’s leading airlines.

As the rapid modernisation of Dubai brought increasing levels of technology and sophistication to architecture and building design, Trans Gulf Electromechanical was established in 1975 to provide high-quality mechanical, electrical and plumbing services to construction projects across the UAE. The business is now considered a regional leader in the industry, and was a founding member of the Emirates Green Building Council.

As the Group’s business activities grew to multi-million-dollar projects and revenue streams, in 1979 Saeed & Mohammed Al Naboodah Holding Ltd was also established with a capital of AED200 million to manage the expansion of the company’s operations.

Despite the Group’s considerable achievements in the construction industry, its roots have always lain in trading. Placing a new emphasis on the Group’s commercial operations, Swaidan Trading was established as its commercial division in 1979, and today represents a diverse portfolio of brands across the automotive, commercial vehicles, heavy equipment, renewable energy, smart cities and agricultural sectors.

The discovery of oil in Dubai in 1966, and its first exports in 1969, would pave the way for the rapid development of the emirate into the global business and leisure destination it is today.

To meet the huge demands of Dubai’s burgeoning construction boom, Al Naboodah Contracting was established in 1969. Initially focused on residential and commercial buildings, the company later moved on to work on road and civil projects, and quickly set to work building many of Dubai’s most vital traffic routes and infrastructure.

In 1958, brothers Saeed and Mohammed Al Naboodah opened a small shop in Deira and began to trade in agricultural machinery.

From a modest investment of only 2,000 rupees, so began the growth of one of today's leading brand names in the UAE - the Saeed and Mohammed Al Naboodah Group.